Before the bug: from the Archive

In the absence of very much news during the lockdown, the HebWeb is taking the opportunity to celebrate our area by digging into our archives, and showing local life before the bug. Most days, our home page will be updated with HebWeb articles from around the same date from the past 25 years.

Workers' Coop celebrates first successful year - free cake and drinks were given out to Valley Organics customers on Saturday. Read more about what workers told the HebWeb (9 June 2014) Glyn Hughes: local author and poet Glyn Hughes has died. Glyn was the author of Millstone Grit and the award winning Where I used to Play on the Green, and a contributor to the HebWeb, including 11 poems - see our Features section. Add your comments on our Lives Remembered page

HELEN OF FOUR GATES - film ‘lost’ for 90 years, used Hebden Bridge as a location. Heart-rending tale returns to its local roots. On June 10, local people will be flocking to the Picture House to watch the film - Helen of Four Gates - as it shows on a public screen for the first time in 90 years. More info - 26 May 2010

NO SAINSBURYS will be built at the old Fire Station site. The HebWeb has learned this morning that the Sainsburys appeal against refusal of planning permission has been unsuccessful. More info about the Planning Inspector's decision, and links to news and discussion over past 18 months. (22 May 2015)

The first episodes of Gentleman Jack, the new drama from Happy Valley writer Sally Wainwright, are based upon a book written about Anne Lister by local writer, Jill Liddington and published by Hebden Bridge publishers, Pennine Pens. More info, links and trailers (19 May 2019)

Jeremy Corbyn in Hebden Bridge. Hundreds packed into the Town Hall on Monday (15 May) to support and hear the Labour leader. Photos, videos and report. (15 May 2017)

More from Before the bug

Hebden Bridge Arts Festival launches Trouser Town theme Artistic Director Helen Meller said, "The response to the Trouser Town theme from the community has been amazing. We've created a series of events based on the impact of the town's textile trade. Read story (9 May 2016)

Six candidates for Calder Valley in the General Election. Full details on the HebWeb Election Section (11 May)

May Fair at Wainsgate
Photos and info - updated

HEBDEN 500 - Eye-catching new signs have gone up at both ends of Hebden Bridge, welcoming people to our creative hotspot and to the 500th anniversary celebrations. Read more - 3 May 2010

Newly Rebuilt and Extended Skatepark Reopens - Hebden Bridge now has a skatepark that any town or city would be proud to have and it’s been achieved with the help and commitment of our young people. More info - 3 May 2011

Although the Hope Baptist Church is one of the largest venues in Hebden Bridge, yesterday evening it was packed full for the Hebden Bridge Hustings. Six of the seven general election candidates for the Calder Valley constituency were present to answer questions from around 230 local voters. Read report

Hebden Bridge: a Sense of Belonging by Paul Barker. New book illustrating how Hebden Bridge has changed from when the mills closed, gradually becoming 'the Greenwich Village of the north'. Read more (25 April 2012)

Director and Writer Kay Mellor at the Picture House's gala screening of Fanny and Elvis to celebrate the transfer to the Town Council of the Hebden Bridge Picture House. Report and Pictures (25 April 2012)

Robbie Coltrane comes 2nd in World Dock Pudding championship. Robbie and the crew thought that Hebden Bridge and Mytholmroyd were absolutely stunning places and the people they met friendly and welcoming. Read HebWeb News from 23 April 2007

Before the bug: 17 April

The Rise of Real Bread in the Calder Valley. The Bakehouse is a coop of 7 members and 3 volunteers who share a passion for local produce and create loaves free from the additives. Read more (17 April 2014)

A Celebration of the Life of John McNair, an educator, champion of the Spanish Language, a founder of the local University of the Third Age and long time Labour Party activist. Read more (17 April 2013)

Seedy Saturday - Bring along any unwanted seeds or plants (or just yourself and a willingness to grow things) and swap them for new ones to fill up your garden. Read more 18 April 2010

Before the bug: from three years ago 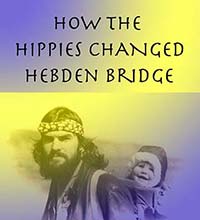 How the Hippies Changed Hebden Bridge: An exhibition organised by the Local History Society aims to show how those who moved into our area in the 1970s - the locals called them 'hippies' - kick-started the cultural renaissance which is today so Hebden Bridge. Read more.

Saxophone Summit Sextet at the Trades Club on 15 April 2010

With attendance over 2000 and a Picture House full house for Wild Rose, The first ever Hebden Bridge Film Festival took place from Friday 22 to Sunday 24 March and was an overwhelming success. It was announced at the end of the Festival that it will return next year. Read report (1 April 2019)

64,000 wheeled bins are awaiting delivery to households across the borough. Around three quarters of all Calderdale householders will start to take delivery of the new bins this month, in preparation for the introduction of the new collection service beginning in April. (2 April 2009)

Bridge Mill: History on our doorstep. Justine Wyatt, with the support of the mill’s current owner David Fletcher, has uncovered more of the story of the building, and gave a fascinating talk to the Hebden Bridge Local History Society. Read more (3 April)

Heart of the Pennines - a new venture to promote walking in the Upper Valley. Local walking groups have organised a new website to to promote our area to walkers from other parts of the country. Read more (3 April)

Women of Blues - The Hebden Bridge Blues Festival is celebrating the contribution of women with a special ‘Women of Blues’ night, which brings together some of the best female blues artists in Britain today. Read more - 4 April 2010

Hauling a Grand Piano up Cragg Vale by Bike - Cyclists pulled the piano up the longest incline in the country on Sat, 5th April. Read more about this audacious musical and cycling adventure. And see the HebWeb photo gallery

Grant Success for Village Turbine: Blackshaw Head based Pennine Community Power has won a grant of £30,000 which will partly fund a community wind turbine at Blackshaw Head. Read more (5 April 2012)

Before the bug:
From the HebWeb archive: 5 April

Hauling a Grand Piano up Cragg Vale by Bike - Cyclists pulled the piano up the longest incline in the country on Sat, 5th April. Read more about this audacious musical and cycling adventure. And see the HebWeb photo gallery (5 April 2014)

Grant Success for Village Turbine: Blackshaw Head based Pennine Community Power has won a grant of £30,000 which will partly fund a community wind turbine at Blackshaw Head. Read more (5 April 2012)

More from before the bug

Before the bug:
From the HebWeb archive: 6 April

Boxing Day Floods - Economic Impact Report published: Businesses in Calderdale have lost £47 million so far as a result of the Boxing Day floods. Just 61% of Hebden Bridge businesses are back open after 3 months. 30% of businesses affected (nearly 300) were in Hebden Bridge. Read more and see report 6 April 2016

Before the bug:
From the HebWeb archive: 7 April

Jonny Walker, Man of the People, Busker and Activist died 14 March 2018. Jonny was remembered on Saturday, 7 April at 10am in George's Square for a minute's silence and to sing his favourite song, 'Let it Be' by the Beatles. Read more

Before the bug:
From the HebWeb archive: 8 April

"Spring has finally arrived in this little old milltown: a great relief for locals driven half crazy by another long Pennine winter. Due to the town's unusual topography, hemmed in on all sides by steep hills, the winter sun seems to set shortly after breakfast. But now the daffodils are out, the trees around the old packhorse bridge are bursting with blossom, and the Town Drunk has come out of hibernation." From the first episode of View from the Bridge, HebWeb, 1997

Lives Remembered Peter Coles, whose funeral was on 8 April 2011, was a teacher, educationalist, and gifted photographer, remembered for his warmth, wisdom, and good humour.

Before the bug:
From the HebWeb archive:
Good Friday 2011: Pace Egg play

Duckmania returned to Hebden Bridge. Why? The bigggest question about the Duck Race is why? Why why why? (April 2014)

Hebden Bridge improvement work to start after Easter Once completed St George's Square will be fully pedestrianised and Bridge Gate will provide access for buses and limited loading only. (April 2006)