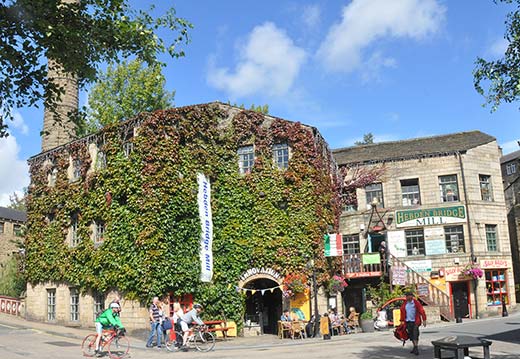 Water power back to water power, after a saga of ruin and regeneration, one of Britain's oldest surviving former water mills, (built in 1314 when the Battle of Bannockburn was hot news) goes full circle next week (Sat Sept 6th 2014) with the official 700th birthday launch of a visionary green  project to once again generate power – 21st century style!

Brass bands and an afternoon street party will sing "Happy Birthday" to historic Hebden Bridge Mill, the heart of the well-known Yorkshire Pennine town, in celebration of a remarkable evolution from mediaeval manorial corn mill to beacon of eco energy.

Now hailed as 'The World's 4th Funkiest Town' (British Airways) and 'The Best Small Town in Britain (Academy of Urbanism), the  former thriving  textile town of Hebden Bridge suffered depopulation and dereliction when the industry collapsed in the '50s and 60's. Among the casualties was Hebden Bridge Mill, whose water wheel was still powering sewing workshops as late as closure in 1956. One of Britain's oldest industrial buildings, Bridge Mill was saved from collapse and demolition in 1972 by local industrial heritage enthusiast David Fletcher and is now English Heritage Grade II listed, the mill reopened, after years of restoration, as retail, restaurant and workshop space.

"Perhaps work took so long because, specialist craftsmen apart, I was the only labourer on the job" joked keen environmentalist David. "There was no external finance available then which has made it a long haul. But 12 small businesses and 46 local people make a living here now. And above all, bringing water power back to the mill means shopping, eating and working here doesn't 'cost the earth'!"

As a personal Millennium project, the mill's water wheel was restored in Year 2000, authentically renewed with waterproof green oak and locally hand cast iron. Saturday's 700th birthday party marks the launch of Phase Two: the state-of-the-art £140,000 Archimedes Screw, whose river-powered eco electric energy together with solar and heat pump power has already taken a substantial part of the mill off the National Electricity Grid. Phase Three will include the re-harnessing for power of the water wheel itself … the realisation, after almost half a century, of its owner's lifetime ambition. 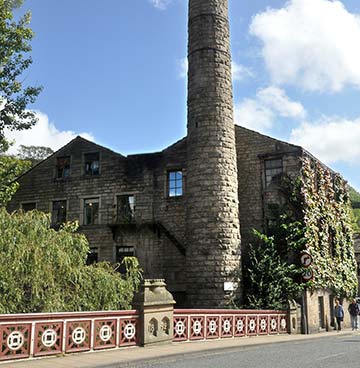 Thanks to Pennine Heritage for the older photos.