Members of Todmorden U3A were presented with a different format when the main speaker was introduced at their April general meeting.

Peter Carrigan, U3A's speaker finder, interviewed Steve Murty about the history of Upper Calder Valley, a presentation entitled Summat a' Nowt. This was at Steve's request, as he felt more comfortable than facing his audience more directly.

Did this mean that Peter had to draw him out? Not a bit of it, in fact, Peter needed to put but few questions, and then usually only to get Steve to give another angle on whatever aspect of life in Stubb he was focussing on.

For it was life in Stubb, the township in which he was born and raised, that Steve related to his audience. Customers of Steve's motor business new to the area would ask him about the Calder Valley.  At the same time, as a member of Hebden Bridge Local History Society - of which he is now Vice-President, Steve began to realise that there was a lot of local history which was held only in the minds of older people and was not being recorded.  He set about recording the anecdotes he heard about the past from older people.

Steve's own situation, living in one of the 17 cottages which comprised Stubb, in which his family had lived in for five generations, lent itself to the kind of research he wanted to do.  Sixteen of the cottages were lived in by people in their old age. Those people had memories going back over a century.  Some of Steve's childhood memories aided him, too. When he had just started school he was diagnosed with suspected TB.  This meant that although he did not go to school he was not confined to home. So he visited local artisans, farmers and neighbours and heard all sorts of tales of days gone by.

At that time, Steve said, Stubb was in a time warp as there had been no changes to the houses, still with the old ranges with a pot hanging above, rag rugs over flags, not a hint of modernisation.

In the fifties, Steve's parents were unmoved by visitors' suggestions that they modernise by such steps as knocking out mullion windows and plywood boarding doors then painting over. Others did modernise in similar ways and later replaced wooden window frames with those made in pvc. The whole process, Steve wryly remarked, was largely reversed in later years by the comfortably off offcumdens who moved into the cottages and set about restoring "original features".

The sinks and the larder were on the cooler, north side of each cottage. Each had a built in cupboard which served to store almost everything they owned when not in use.  Floor level would have stored buckets, basins and mixing bowls. The shelf above took pans, kettle, flat iron, etc. Next would hold the cutlery tray and everything to be kept dry – sugar, salt, herbs and important papers. On upwards, the shelves held, crockery, linen, table cloths and any other possessions. All would be hidden from visitors behind panelled doors.  Washing was always done on a Monday - protocol was strict - water would be boiled in a tub and a washboard used.

Steve revealed that through examining court records going back as far as 1307 and comparing the cases that his wife related to him in her role as a magistrate, the same kinds of offences committed remained the same over the years.

Most of his audience were probably aware of the past existence of the gibbet in Halifax.  Steve explained that cloth left hanging to dry was vulnerable to theft so the Halifax wool merchants instituted the gibbet as a deterrent. That was the reason for Halifax being a place to be delivered from in the lines: "From Hell, Hull and Halifax, the Good Lord deliver us." In Hull's case, Steve said, it was the risk of being press-ganged that was the reason for avoiding it.

Using his grandfather as an example, Steve illustrated how, despite working 12 hours a day, six days a week as a wheelwright, he found time to work a big garden, with all sorts of fruit and vegetables, and keep hens. His grandfather also played cricket and become a champion at billets. This was typical of the time. People educated themselves and Todmorden was home to a number of experts in botany, archaeology and other disciplines and exchanged papers with others, including academics.

With regard to social mores, Steve surprised no one when he said that years ago children received a clip round the ear, or perhaps the belt for more serious misdemeanours.

If a woman received a male visitor in circumstances deemed inappropriate, the community would gather outside the door with pots and pans which would be beaten with increasing speed until the offending male was driven out and chased away. "Rough music" it was known as. The offender was only accepted back into the community if he made an honest woman of the lady concerned, or if he could not, then he was not accepted back at all. Steve observed that if the same practice continued today, there would be no peace and quiet in the valley! 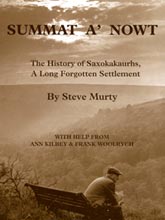 When time forced Steve to bring his talk to a close, Peter referred to a number of aspects of Valley life that were not touched on. Material for a return visit, perhaps. Steve's appreciative audience no doubt left with that hope in their minds. Some of them bought a copy of Steve' book, Summat a' Nowt, available at the meeting. Vice chairman Jean Pearson presented the gift token accompanied by warm applause.

The short talk was given by Daniel Jessop, Volunteer and Events Co-ordinator of Todmorden Town Hall Heritage Centre and Volunteer programme.  A new Heritage Centre will be set up and volunteers trained to conduct tours of the Town Hall.  The project will include research into the history of Todmorden and the Town Hall; mounting exhibitions, and oral history coffee mornings to encourage local people to share stories about the building's rich heritage.  Those interested in being involved can contact Daniel on 01706 548105; 07912 891370 or email  Twitter @TodTownHall

The next Todmorden U3A general meeting is on Thursday 21 May at Central Methodists, Todmorden at 1.45.  The speaker will be Sally Pulvertaft - Extremes and Opposites; Impressions of India.  Admission is free.

Many thanks to John Bouttell for this report

Previous U3A reports on the HebWeb

HebWeb News: University of the Third Age: The Machine that Changed the World (25 February 2014)

HebWeb News: University of the Third Age: Music and the Deaf (12 February 2014)

HebWeb News: University of the Third Age: Psychology and You - Part Two David Groves made a welcome return as a speaker at the October Todmorden U3A (26 October 2013)

HebWeb News: Hebden Bridge Little Theatre, A Short History was recounted by Ray Riches to the University of the Third Age. (28 Aug 2013)

HebWeb News: John Sheard, retired land agent to the Duke of Devonshire, gave his third talk to members of the U3A, this time on Sir Joseph Paxton, Knighted Gardener (26 July 2013)

HebWeb News: The Story of the Hebden Bridge Calendar (April 2013)

HebWeb News - May and June meeting report - Keep Learning: Live long and prosper and the role of the Lord-Lieutenant