Streets of fun on Street Sunday

The Street Sunday event is the now the traditional end of Hebden Bridge Arts Festival and this year some of Britain's best street performers join local acts in four venues across the town from noon until 5pm.

Mr Wilson's Second Liners are a flamboyant six-piece street band who play brass versions of club classics like Ride On Time, and since the group's early days playing their local festival they have developed into one of the UK's most sought after outdoor acts as people groove along to the hits.

They are joined by suburban glamour queens Yvonne and Barry who are Couple No 69 in the offbeat Two Left Feet and there will be loads of magic madcappery from the irrepressible Other Half Productions. For the more daring, avuncular pyromaniac Mr Burn (pictured above) will literally be playing with fire in St George's Square.

The young at heart can enjoy the amazing Gurgle-Splosher machine as it makes its way round town as festival goers open values and pull levers creating a playful and interactive sound-sculpture based on their version of the local water cycle.

In the Town Hall from 1pm, there's a special Memory Box (see above)- created and performed by the community - celebrating the positivity and wonder of childhood through the generations.

Down at the Marina join Ben Gates to whip up some crazy beats on his sound sculptures and a programme of dance from Accrington Academy and the flamenco dancers and the Calder Valley Brass Band will be playing.

"I think people will love the Gurgle-Splosher as people have fun and get to think about the ebbs and flows of water locally which is the theme of this year's festival." 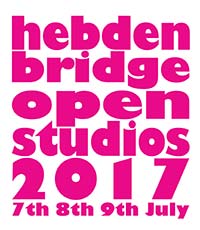 This year for the first time the Arts Festival has joined forces with Hebden Bridge Open Studios to create the Open Weekend running from July 7 to 9 showcasing the work of the town's best gardeners and artists.

As well as wandering round gardens across the town there's a chance to meet Open Studios' 90 artists in their workshops, and CBBC's Mr Bloom will be meeting junior horticulturists in the Town Hall at 2pm on Sunday 9 July.

For details of all events go to Festival website or pop in the Town Hall to pick up a programme.

Shout out for Open Weekend (12 June)

Sights and Sounds of water (17 May)

Free family fun for all (5 May)

Will Self is on the phone to Hebden Bridge (17 April)

Sara Pascoe is an animal (28 March)

Festive Fandango is back (14 Oct)

More coverage of the Festival on the HebWeb