THE MAKING OF A TOWN HALL

Now that the rebuilt Town Hall is 10 years old, read how the development of this groundmaking project was reported on the HebWeb from 2007 until 2012 when it opened.

The Hebden Bridge Town Hall became one of the first in the country to be owned and managed by a community-run charitable trust, following the pioneering asset transfer from Calderdale Council.

OCTOBER 2007: HEBDEN BRIDGE TOWN HALL - ambitious plans to put this distinctive local building once again at the heart of local life
An ambitious community-led initiative is hoping to breathe new life into one of Hebden Bridge's most important historic buildings. Andrew Bibby has told the Hebden Bridge Web, "We want to make this landmark building once again the heart of local life. With the Hebden Bridge community directly responsible for looking after it, we're sure that we can maximise its use, both for voluntary groups and for public services." Read article 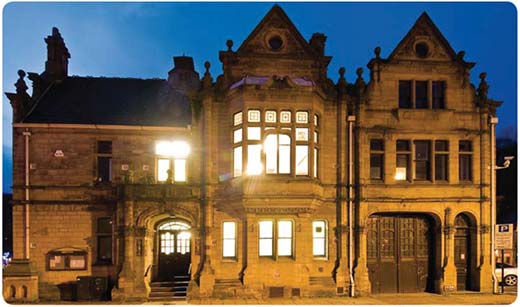 Town Hall before the changes

JULY 2008: GOVERNMENT GIVES THUMBS UP TO HEBDEN BRIDGE TOWN HALL PLANS
The vision of turning Hebden Bridge's beautiful but neglected Council Offices buildings into a vibrant community resource for the town has received strong endorsement from the government. The Department for Communities and Local Government announced last week that Calderdale has been selected as one of three regional local authorities to pilot the transfer of assets into community control. Read article

JANUARY 2009: NEW CHARITY CREATED TO MANAGE TOWN HALL
The Charity Commission confirmed last Monday (Jan 19th) that it had awarded registered charitable status to Hebden Bridge Community Association. This new organisation, registered as a not-for-profit company last Autumn, has been established with the aim of taking over in due course the management and control of the Town Hall (originally the Council Offices for Hebden Royd UDC) from Calderdale. Read article

MARCH 2009: TRANSFER OF TOWN HALL TO COMMUNITY OWNERSHIP ONE STEP CLOSER
Deciding the future of Hebden Bridge Council offices will come a step closer this week when officers from Calderdale Council meet with representatives from the Hebden Bridge Community Association on Friday, 6th March. The meeting will explore the Council's approach to 'asset transfer' - a national programme where the ownership of buildings or land can be transferred from the Council to community groups or organisations, if it can be shown that the community as a whole would benefit. Read article

APRIL 2009: TOWN HALL GROUP SEEKS "FRIENDS"
A major step forward in the campaign to protect and develop Hebden Bridge's landmark Town Hall Is being taken with the launch today (Thurs April 2nd) of an ambitious appeal to the local community to show its support. The target for the new scheme, the Friends of Hebden Bridge Town Hall, has been set extremely high, with the organisers aiming to sign up a total of one thousand local people over the next few weeks. Read article

Above: this eleven minute film produced by Nick Wilding,
tells the story of the The Town Hall Project

SEPTEMBER 2009: TWO MAJOR GRANTS BOOST TOWN HALL PROJECT
A generous donation of £10,000 from Hebden Bridge's Rotary Club has been greeted with delight by members of the trustees overseeing the Town Hall project. A second major fillip has been the news of a £5,000 grant forthcoming from the Community Foundation for Calderdale. Read article

DECEMBER 2009: TOWN HALL FUTURE SECURE
The future of Hebden Bridge's Town Hall is secure, after last night's landmark decision by Calderdale council's Cabinet to transfer the historic building to a community-run charitable trust. The decision means that Hebden Bridge is to become one of the first towns in the country to take direct responsibility for running its own Town Hall building. The transfer will be made to Hebden Bridge Community Association. Read article

FEBRUARY 2010: INVITATION TO SEE PLANS FOR TOWN HALL including a 200 seater hall with riverfront location. Proposals for major new community facilities for Hebden Bridge will be unveiled on Saturday February 13th, at an consultation event being held at the Town Hall. Everyone is welcome to pop in between 11am - 1.30pm and a warm welcome will be assured along with homemade cakes and hot drinks. Read article

MARCH 2010: HEBDEN BRIDGE TOWN HALL PASSES INTO COMMUNITY OWNERSHIP
The transfer marks the culmination of a lengthy campaign to ensure the protection of the long-term future of the Town Hall following the loss of other public buildings in the town in recent years. The Community Association has pledged to maintain the building in public ownership."This is the moment we've been working for, for so long," says Mr Peter Hirst, chair of the Association. "It's been distressing to see how the Town Hall has become run-down in the last few years. Now at last we can make a real difference. We're determined that the Town Hall will become a focal point for the town's civic and community life." Read article

MAY 2010: PUBLIC CONSULTATION ON MAJOR DEVELOPMENT PLANS AT TOWN HALL
Hebden Bridge people will have another opportunity to look at the ambitious plans being prepared for developments at the rear of the Town Hall this Saturday (22 May). "Our architects have done a great deal of work since our last public consultation in February, and we're very keen that as many people as possible get the chance to see what they're proposing. There was a strong consensus in February to make the most of the river frontage, and that's exactly what the architects are now suggesting," says Andrew Bibby, one of the Association's trustees. Read article

JULY 2010: TOWN HALL DEVELOPMENT PLANS GO TO CALDERDALE TODAY
Detailed plans for the future development of Hebden Bridge's Town Hall have been given to Calderdale's planning department today by Hebden Bridge Community Association. The Association has also announced plans for an Open Day at the Town Hall on Saturday July 24th, when its plans will be available for inspection and discussion. The plans, as presented, reflect the input from the three public consultation days held in Hebden Bridge, in October, February and May. Read article

OCTOBER 2010: CALDERDALE PLANNERS GIVE GREEN LIGHT TO TOWN HALL PLANS
Hebden Bridge Community Association is delighted that its plans to extend the Town Hall have been given planning consent. The decision, taken by councillors at last night's planning committee, will potentially give the town major new community and civic facilities, as well as opening up the river Hebden waterfront for a new public square. Peter Hirst, chair of the Association's trustees, says: "This decision is the one which we have been working towards for two years." Read article 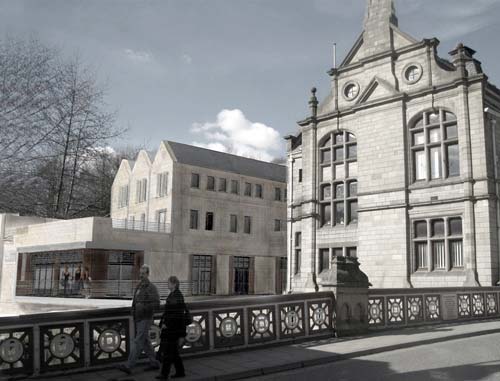 DECEMBER 2010: TOWN HALL DEVELOPMENT GETS GO AHEAD
Plans for major new facilities in Hebden Bridge's Town Hall have been given the green light.  Building work is expected to commence in April 2011. Much of the funding needed is being provided by the Communitybuilders fund, administered by Social Enterprise Business. "We're absolutely thrilled to be able at last to press the button for go," says Peter Hirst, chair of Hebden Bridge Community Association. Read article

APRIL 2011: PENNINE QUARRY WILL SUPPLY STONE FOR TOWN HALL - The extension to Hebden Bridge's Town Hall is to be built of best Pennine stone. Hebden Bridge Community Association announced today that the stone for the major new building will come from the Crosland Hill quarry near Huddersfield, regarded as one of the best sources of true Yorkstone. The stone, which is a Millstone Grit sandstone, is light buff in colour and is extremely hard. It will be a very good match for the stone used in 1897 and 1898 when the original Town Hall was built. Read article

JUNE 2011: CHANCE TO FIND OUT THE LATEST ABOUT TOWN HALL CONSTRUCTION ON SATURDAY - Local people who have been watching the progress on the construction site at the rear of Hebden Bridge's Town Hall will have a chance to find out more this Saturday (July 2nd). "The new building should be ready next Spring, and so far the contractors are exactly on target," says the Association's chair Peter Hirst. Read article

AUGUST 2011: TOWN HALL WILL OPEN DOORS AS PART OF NATIONAL HERITAGE WEEKEND - Trustees of Hebden Bridge Community Association, which runs the town hall, will be on hand to welcome visitors and show them round the building on Saturday September 10th. Two special 'hard hat' tours of the land at the rear of the site currently being developed into new community and enterprise facilities are also being arranged. These tours, at 11am and 12 noon, will provide a first glimpse of the new buildings as they begin to take shape. Read article

DECEMBER 2011: TOWN HALL GETS HERITAGE LOTTERY FUND BACKING - rustees for Hebden Bridge Community Association, the charitable trust which runs the grade II-listed building, have expressed their delight at the Heritage Lottery Fund decision, which includes a development grant of £29,900. The award opens the way for the Association next year, under the Heritage Lottery Fund's two-stage approach to funding applications, to submit a more substantial funding bid of £338,900 at a later date for restoration of the building and commemoration of its heritage. Read article

SEPTEMBER 2012: HEBDEN BRIDGE'S COMMUNITY-RUN TOWN HALL: OPEN AT LAST - Open at last – that's the reassuring news from Hebden Bridge's community-run Town Hall, following the finishing touches which the builders have been putting to the building in recent weeks. Access to the whole building, old and new, is now through the main entrance foyer, which has been created out of the derelict garage opposite the market square, once used to store the town's fire engine. Read article 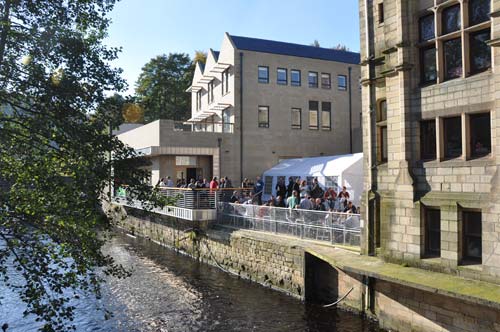 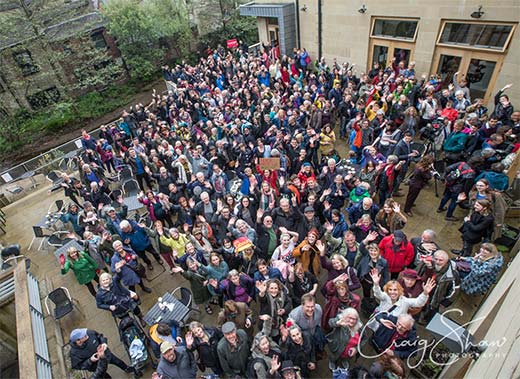